Chant This page is part of the collection 'Ottawa, Carleton Library, Archives and Research Collection, Ms. 1'.

Notes that are coloured in grey were later additions. Feasts are included to the best of my ability.

Research of Chants by Emily McKay

Within my research of the Chants I had found various characteristics that seemed to be only present within MS.1, like the fact that the Office of the Dead appears first. Although that answer remains unknown what I have found fits alongside others work on the manuscript.

To begin, the chants fit within within the liturgical calendar. Starting first with a tonery, which is an introductory chants  that follow eight different tones. Following is a section on the Office of the Dead, Advent, Christmas and so on. Therefore the layout follows from November during All Saints Day covering most liturgical calendar days throughout the year.

As seen beside in the chart (Fig.1)  for each of the eight tones there is about 6 verses. Most of these verses end with Gloria Patri (noted in Fig. 2), which is a hymn praising God. These verses are noted through rubrication, or red V. In the second tone, there is however a rubricated V between the last verse Gloria Patri which does not appear in the other seven.

My theory  to explain this was either it was a mistake made by the script hand or a possibly a way of changing the tones to fit within a different melody.

Office of the Dead

The first thing noticeable within the Office of the Dead is the inclusion of  two invitatorium, What are they? An invitatory is an important item which is responsorial in its methods of the performance yet more like an antiphon in musical style and liturgical function. Invitation piece for a specific feast day or office (Andrews, 36). Psalm verses are sung by Soloists and the refrain is choral (Andrews, 34).In this case of MS.1 rubrication shows the beginning of the invitatory of the Office of the Dead.

According to medievalist.net, which is a website that highlights the hours of the office and their psalms, antiphons and responses, it mentions that within the Office of the dead;
“The Invitatory following is said on the day of the memory of all the dead, and as often as the three Nocturnes are said as before, at other times it is omitted, and is begun at the Antiphon of the Psalms of the Nocturne, and one only Nocturne with the Lauds, is said in this order: On Monday and Thursday, the first Nocturne: Tuesday and Friday, the second Nocturne: Wednesday and Saturday, the third Nocturne”(http://medievalist.net/hourstxt/deadmata.htm).

Examples from the first nocturne show that the manuscript follows the outline on medievalist.net and incorporates within the antiphon excepts from Job and various psalms throughout the Book of Psalms. This is compared in my notes found here: https://docs.google.com/document/d/1M3eqqmeT1seplyTQFRgO8vNUe3P9_y6phjT-ftSimAk/edit?usp=sharing

There is also an alius invitatory or alternate invitation piece.

From this source it appears that the Circumderunt within the text is often used by Spanish composers in the Office of the Dead. Although many on the list are from the sixteenth century later than MS.1 has been dated , it may have been possible that these were texts were adopted by composers from elsewhere and adapted within Spain.

According to Andrew Hughes, the invitatory for mass is more antiphonal in form and style; characterized by the reduced number of psalm verses in normal psalm-antiphonal structure. Since MS. 1 appears to follow normal set of antiphon and psalm and also has reduced psalms; different than what "the entrance procession in papal churches [in mass would] probably used the whole psalm" (Andrews, 35). I believe that the chants in MS.1 would not be used during an invitatory for Mass but rather for use by monks and or for teaching chant within the church.

Conclusions of Office of the Dead

The Chants included within the text are very helpful at distinguishing the type of manuscript this is. Due to the various amounts of antiphons this text would be considered a Antiphonal psalmody. This means the manuscript relies on choral performance (Andrews, 30). Often in an antiphonal psalmody two choirs would alternate singing (https://www.britannica.com/art/antiphonal-singing). This is notable throughout the text such as in the Office of the Dead, one of the largest parts of the manuscript, where the antiphons and psalms appear in sets.

Still unknown: is why is the Office of the Dead placed first?

The Rest of the Text

As gathered by Lauren through her transcription of the chants, the majority of the remaining text after the Office of the Dead has either few melodies associated within the words located on the Cantus database, or different texts that are similar but only for a feast day. An overall examination, also confirms that many of these remaining feasts days are quite small sections with a few melodies and follow similar patterns of being said at either matins, lauds or vespers.

Similarities to Chants on Cantus

There are  three main manuscripts that have similarities to MS.1 on the Cantus Database.

As for similarities of chant, MS.1 had very similar melodies to Manuscript D-Mbs Clm 4304 on the Cantus Database. This Manuscript is called Munchen, Beyerische Staatsbibliothek and is from Augsburg, dated 1519. It is an Antiphoner from the Benedictine monastery of SS.Ulrich and Afra in Augsburg. It was written by Frater Leonhard, a famous manuscript illuminator.

Similarities between this manuscript and MS 1 lie within the melody; both include the office of the dead, four line staphs and square notation. In MS. 1 the Office of the dead ranges from Also as explained in Cantus database there is:

Closeness of the Augsburg codices in the Melk tradition to early Franciscan codices. (Much the same pattern is to be observed in books of the Olivetan reform, beginning in the year 1313, which have the same order of the chants and the "rubrica romana"). There are some small differences in the melodies, but not many. All these reforms are marked by an adaptation of the secular to the monastic cursus, an abbreviation of the Office, a uniform practice of modal assignments and differentiae, and, finally, a limitation of the ambitus (Cantus, http://cantusdatabase.org/source/374105/d-mbs-clm-4304).

What this suggests is that although through others work on the project such as paleography, we have dated this manuscript previous to 1519, perhaps the author of the manuscript D-Mbs Clm 4304, Frater Leonhard, had copied from this text or previous chants from the Franciscan order.

Differences between Ms. 1 and this text was the occurence of  Christe el(eison) or Kyrie l(eyson)= which is originally greek and means “Lord have Mercy” (http://www.newadvent.org/cathen/08714a.htm).

As mentioned by Lauren during her transcription there were no particular chant resemblance was found in other texts, but similar layout in MS 1 to this chant, Kyrie XI ("orbis factor")—a fairly ornamented setting of the Kyrie in Gregorian chant—from the Liber Usualis (fig.3).

Another similarity was between MS.1 was with the manuscript on the cantus database known as US-CHN bcbl 097, which is a Franciscan antiphoner (sanctorale). This one originates from the 1300s, however there is no certainty of what country it came from. It also has staff notation, small square notes, and cathedral (curial-franciscan curses). Interestingly this manuscript has nine tones for the invitatory psalm. This is not present in MS 1, however it has the 8 different tones located at the beginning of the text as well as it has two invitatories for the Office of the Dead. The manuscript has various hands; including two kinds of textual hands and three main musicians. It is located in John J. Burns Library in Boston College 1996. Like D-Mbs Clm 4304, the Office of the Dead is also located at the back of the text (Cantus, http://cantus.uwaterloo.ca/source/656252).

Lastly, within the later half of the text a manuscript that had similar chants to MS.1 was  Cz-Pak (Praha) Cim 7, which is dated from the 14th century. This manuscript is a psalterium. The provenance of this manuscript is thought to be from Prague. The script is gothic and the notation is bohemian. Many similarities with MS. 1 line up with the Adventus- or the period of Advent as well as other later saints days and events within the liturgical calendar (Cantus, http://cantusbohemiae.cz/source/9138).

To conclude, MS.1 is an interesting manuscript that includes many different chants, elements that when compared against other manuscripts on Cantus did not always much up. What can be speculated though is from the eight tones within the beginning of the text, also the fact that this text at this part is very warn is that the chants are the important part of the text. In many sections, Ms.1 only takes bits and pieces of other psalms or literature. Therefore it is in my opinion that this text, is most likely valued for its chants, and music. 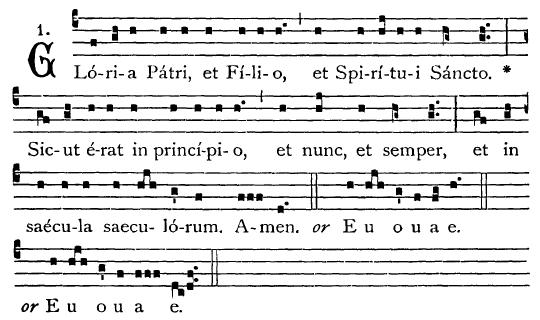 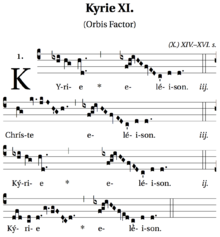