Capitals and Initials This page is part of the collection 'Ottawa, Carleton Library, Archives and Research Collection, Ms. 1'.

This manuscript uses capitals and rubrication in the same fashion as many other medieval manuscripts to separate the various sections and mark divisions within the text for the reader. As there was very little punctuations used in this manuscript the capitals would be used to mark a break in the psalm or the starting of a new sentence. The most important sections of text would be marked by large letters, which are decorated with black filigree pen work or foliage.

The rubricated capitals had different meanings based on their size either to indicate the beginning of a new prayer or as abbreviations showing a change in hymn or sermon. The inclusion of these large capitals means that there had to be advance planning for the layout of the text showing the detail that would have been used when creating this types of manuscript. As well the most important sections of the text would use large rubricated capitals in order to have them stand out for the reader. This allows us to differentiate the most important hymns used by the way they are rubricated or capitalized. While we know that rubrication and capitals where a separate step in creating a manuscript, they can also tell us about the various scribes that would have worked on the manuscript because of the patterns that they used.

In this manuscript there are 4 types of capitals or rubrication that are most often used. The first type that was used at the beginning of the text is the large rubricated Capitals that are between 2” and 2.13” in size.  These capitals usually follow a small-rubricated title indicating the type of liturgical celebration that will follow. This header on the first page is found on the right side of the page indicating the header leading into the page. In this section of the text the rubricated capitals were use to mark he beginning of a new hymn so they are very commonly used but were not used to mark a break in the sentence.

The second type of rubricated lettering is the smaller red initial that are abbreviations showing a change in hymn or sermon, usually about half an inch.  In this section these initials would vary in their meaning depending on the hymn but could represent Uersus, Psalms or an Antiphon which were all Liturgical chants or responses that would be used. The pattern continues by having double heighted strap work black capitals following the small red initials, generally between 2” and 3” in height. These rubricated initials and black capitals follow a ‘call and response’ pattern that was common in these types of liturgical manuscripts. These large black capitals are some of the most detailed forms of capitals that are used throughout the main body of the text.

The last type of capital that was used was a smaller single line black capital usually no bigger than 2mm in height. These smaller capitals would be used to indicate a pause or break in a chant similar to a period or comma that would be used today but staying on the same topic or section. These types of capitals are used frequently and are often only slightly more decorated than the other text.

While this is the main pattern that continues throughout the manuscript there are some changes to the use of capitals and rubrication later on in the text. While the scribal hand changes in the manuscript on page 42R the pattern seems to continue though the scribe does not use any rubrication. However following the blank lined page on 43V the pattern and use of capitals appears to change. While the scribe still uses small-rubricated titles followed by large rubricated capitals to indicate the beginning of the section it sues rubricated letters in the place of black capitals. In this section of the text the hymns follow the liturgical calendar listing out the various hymns and responses that are to be said during the various times of each of these events. As well it indicates which hymns are to be sung during various portions of the days such as during Lent, The Day of Ascension of The Feast of the Trinity. Because of this the titles in this section change more often than in the earlier sections of the text. This means that there is more rubrication than before especially as the large black capitals are not used. As well the scribe in this section did not use smaller black capitals as often as in the previous section and would use small rubricated capitals to indicate a change or pause in the hymn instead.

There are some small differences in the types of rubrication throughout the manuscript with the large rubricated capital on certain pages such as 59V being more ornately decorated the on previous pages, possibly indicating that these hymns are more significant than previous pages. The scribal hand seems to possibly change once again on page 62R and with it the pattern seems to revert back to the original pattern with small and large black capitals being used once again. In the final pages of the manuscript that pattern uses the large black capitals to indicate a pause or break in the chant as they were used in the first section.

Throughout the manuscript the text seems to follow a general pattern using the capitals and rubrication in an organized pattern however in some cases there are capitals or symbols that are used differently by the scribe or break this pattern. Some of the varied symbols that are rubricated are short red dashes that are featured in the text so that the spoken words to match up with the notes that are being played. These dashes continue throughout most of the text but seem to change in the final section of the text on 63V, when the scribes uses a red S like symbol in a similar manner as the dashes previously. However this symbol also changes on the back 2 pages where only rubricated dots seem to indicate when words are to be held. This could possibly mean that the scribe was starting to change the symbol to match the previous pages but the manuscript ends before the symbol fully reverts back.

As well another capital that is used frequently in the beginning sections of the text is a smaller black capital with red detailing. This symbol seems to be used to indicate a pause in the section or sentence of the hymn similar to other black capitals. It could possibly be used to indicate and more important section or put further emphasis on the words that are being chanted. While this symbol is used infrequently its stops appearing in the manuscript completely on 25V. 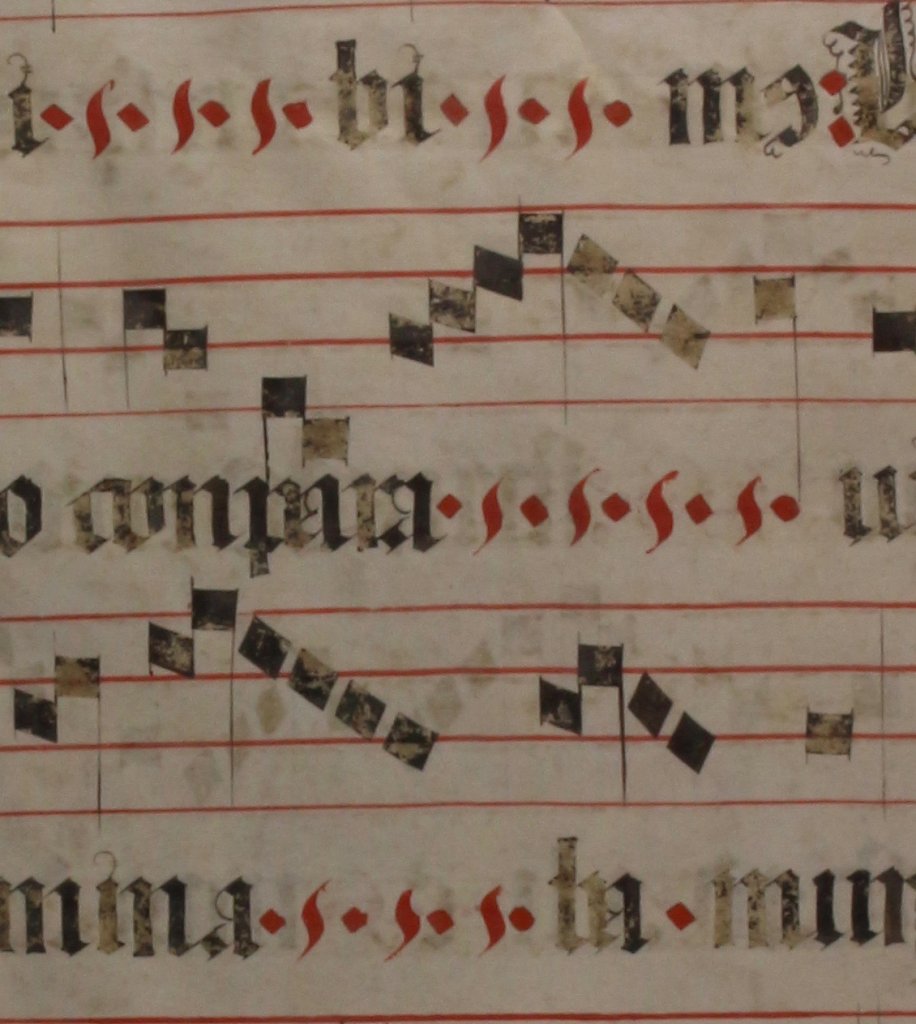 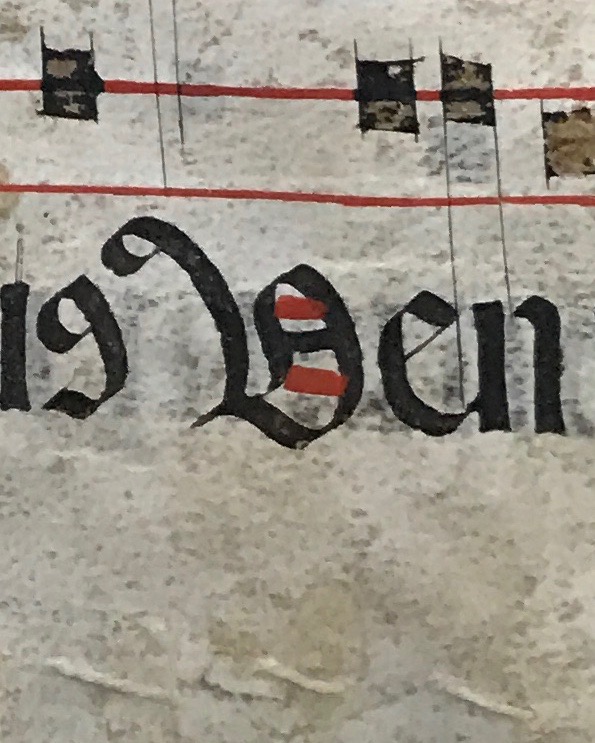 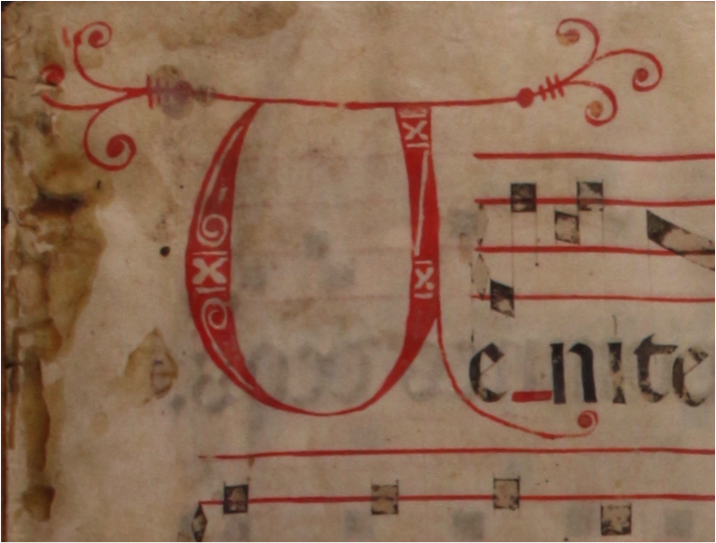 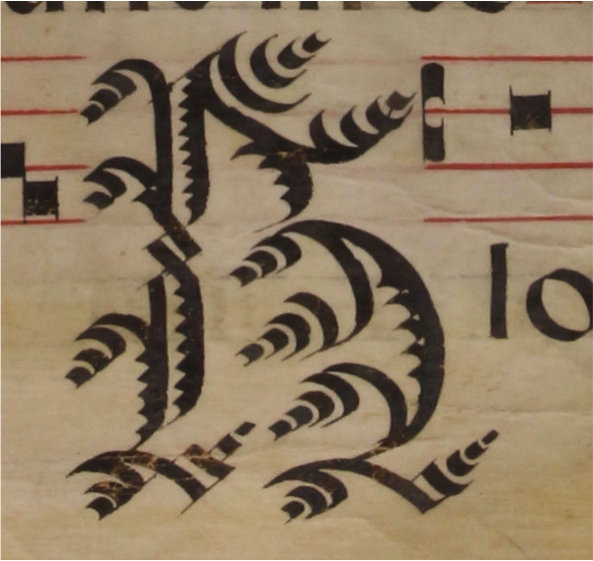 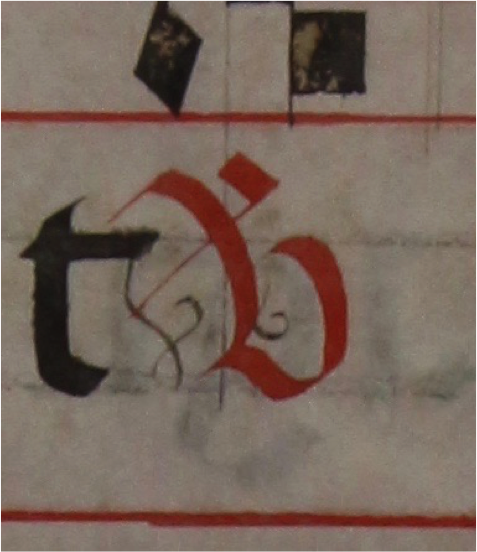 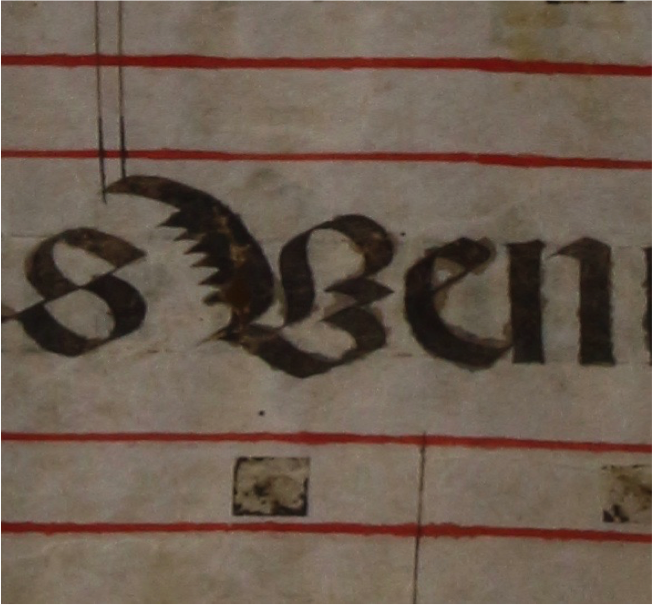