Sicily This page is part of the collection 'Archaeology at Carleton 2016'.

The Site at Marzamemi Sicily 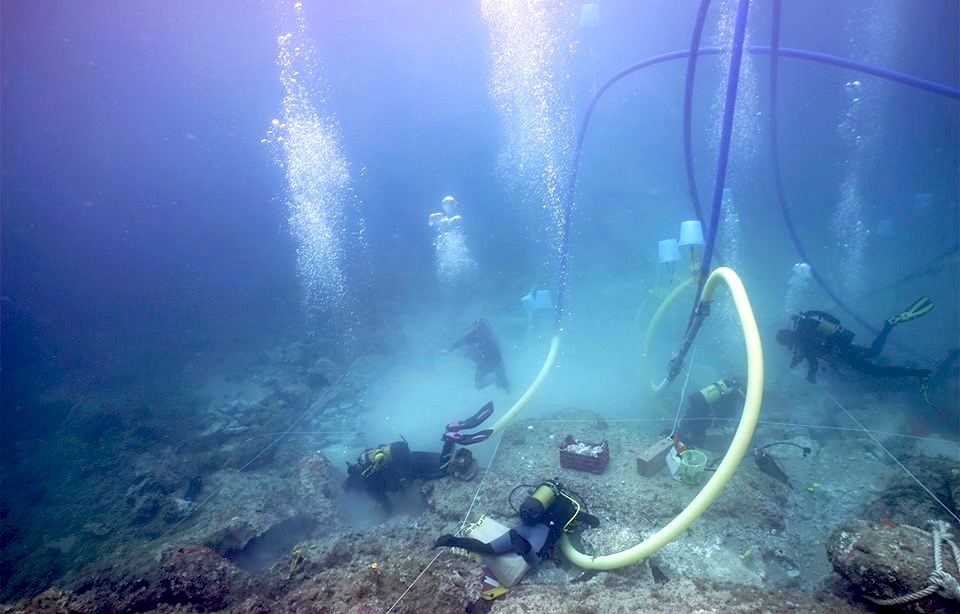 Sheri participated in the Marzamemi Maritime Heritage Project directed by Justin Leidwanger of Stanford University and Sebastiano Tusa of the Soprintendenze del Mare in Sicily.

For more information about the “Church Wreck” and the Marzamemi Maritime Heritage Project, check out the project website (http://marzamemi.stanford.edu) or find them on Facebook @marzamemiproject.

All images are courtesy of the Marzamemi Maritime Heritage Project 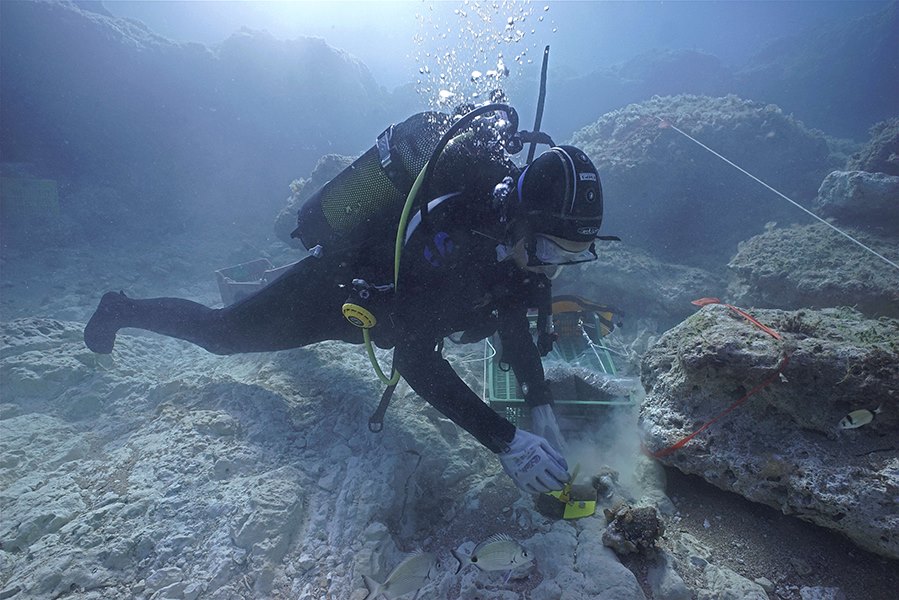 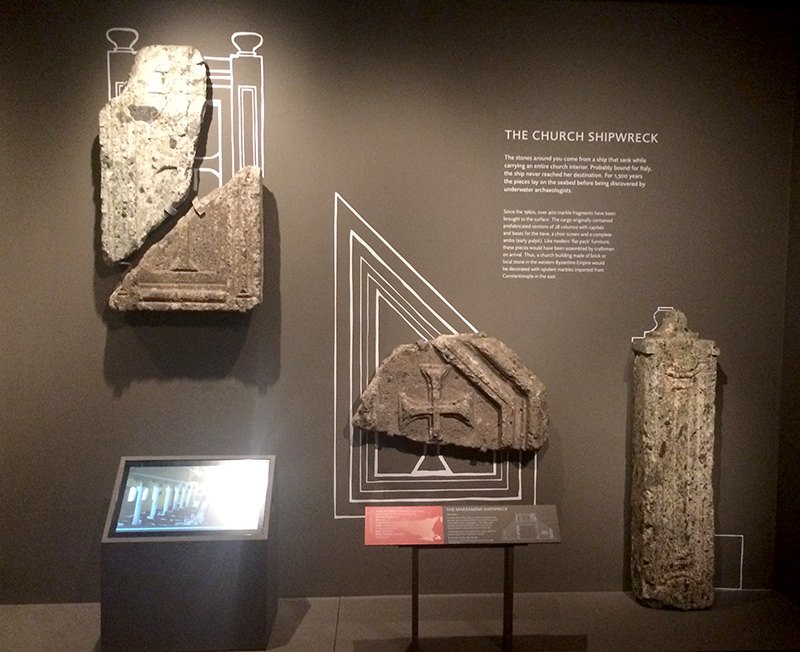 The 'Church Wreck' at Marzamemi, Sicily

Ever since I was 15 I wanted to do underwater archaeology. Inspired by a frazzle-haired science teacher in high school, I now pursue classics in university and I planned that in the summer of my third year I would work on an archaeological excavation. Though I had always been interested in underwater archaeology, I was disappointed with the options I was finding until my professor Laura Banducci suggested the Marzamemi Maritime Heritage Project directed by Justin Leidwanger of Stanford University and Sebastiano Tusa of the Soprintendenze del Mare in Sicily. I participated as a student in Brock University’s Archaeological Practicum led by Elizabeth Greene. This project was more than I could have ever hoped to be a part of. Our incredible team worked six days a week, spending one and a half to two hours every day under water, over 4 hours at the museum and none of it ever truly felt like work. The days were constantly interesting; artifacts were raised almost every day that added a million questions that make this site so interesting.

The wreck itself was from the period of Justinian’s reign in the late Roman Empire. The large architectural elements the ship was carrying are typical of byzantine churches. The most famous example of this architectural style, though a unique one, is the Hagia Sophia in Istanbul, Turkey. Columns of all sizes, pieces of chancel screens and of a large ambo are still being found today as they were by Kapitän who excavated on the site in the 1960s. The wreck might be seen romantically as a metaphor for Justinian’s vision of the empire, reconquering the west and setting a giant building reform, then watching it sink to the bottom of the Mediterranean. But the site for us was a place for debate about sailing, shipping, economic and cultural traditions at the brink of the decline of the Roman Empire, as well as how best to showcase our site for viewers in the modern day.

What did a ship carrying tons upon tons of marble look like? How would it have sailed? Who commissioned the building of this church? An aristocrat or Justinian himself? Would a ship sailing under Justinian’s orders differ from any other ship? How can we answer these questions from what we find in the water? What can we learn from the shape and fabric of the ceramics we’re finding? Is this church a part of a generic church building “kit”? Was the economy in the Empire at this time specialized enough for this type of building sales? Was the ship carrying multiple cargos?  What if the ship was only carrying spare parts? How were churches built at this time? How involved is the architect in the process? How can we display our artifacts for the public? How do we inspire the public to have the same interest that archaeologists have in the project without having many of the answers? These are a fraction of the questions we discussed this season.

A day in the life at Marzamemi looked like this: After a 6:30am breakfast, two dive teams went out in the morning. The first dive team did two 60-minute dives with a tank change in between. The second team did one 80-minute dive. These times grew longer and longer as the season went by. When one team was in the water the other was at the museum. At 2pm we had lunch at the restaurant by the dive shop. 3pm-4:30pm we all had a break usually filled with napping and catching up on paperwork (blog posts and dive logs). 4:30pm-6:30pm held more museum time. 6:30pm-8pm was a second break and from 8pm-10pm we had a meeting to recap the day’s activities followed by dinner at the dive shop restaurant.

In the water we had an unusual amount of time to excavate compared to other underwater sites because our wreck was only nine meters below the surface. The shallow depth meant we could spend a lot of time at the bottom with no need for decompression before surfacing. We spent the time in groups of two working in four by four meter units dredging layers of sand and collecting any artifacts or suspected artifacts. The site is extremely dynamic, and large artifacts that are mapped in one season have often been moved by the harsh winter storms by the next year. This leaves mapping the site to be an incredibly important aspect of our work, but it is also very difficult to answer some of our questions of ship layout or shape.

The artifacts we raised from the water every day were always important and even though surface objects could have moved around a lot there were still patterns to be found. Many squares yielded iron nails much more frequently while some squares contained immense amounts of ceramic or marble. It was always exciting to be excavating underwater in our conditions because one small wave of a hand, moving the smallest amount of sand, could reveal the surface of a piece of breccia (what we called “green marble” because it is green and any hard stone that holds a polish was considered marble by the Romans) or edge of a metal concretion. It was incredibly exciting to keep working and wonder just how big the piece you found would be. It was also a constant game attempting to identify whether the material in your square underwater to be marble or rock. Often marble was so heavily concreted it looked like rock, and fragments we believed to be marble would be identified as ordinary rock during the registration process.

By the end of the season, everyone at the museum had specialized tasks and we immediately broke off into small groups upon arrival. There were so many activities going on and so much progress being made. One group did registration for the objects found that day, another catalogued important artifacts, others worked on the database, examined the different types of marble, analysed ceramic fabrics, studied and drew ceramics, or took publication photos and 3D scans of the objects, My job was to help record the iron nail concretions, which we hope might yield evidence about the ship’s construction.

There were afternoons that our dive master and his team went out and moved rocks on the site or moved columns to the depot. At the end of the season new tanks were built for the larger artifacts and many columns were raised from the sea and brought to the museum. Each week brought something new. On Sundays we had a day off. Often people would bus off to beautiful nearby towns (Syracuse, Noto, Agrigento, Ragusa) or relax at the beach.

In addition to getting so much experience in so many different aspects of working on an archaeological site, we were able to work with the most inspirational and incredible professionals. We had mini lectures from visitors aiding us in the research on isotopic analysis, 3D scanning, and ceramics. Our team consisted of people who have worked on exciting shipwreck excavations for decades with the Institute of Nautical Archaeology; it was incredible to hear stories from them. The team consisted of students from Canada, America and Europe collaborating together and it was amazing to be in a group of people all working in Classics, working towards specializations and further education and moving forward in all different ways.

To any students considering doing an archaeological dig, whether you’re studying classics or not (we had students from Stanford who weren’t in the classics or archaeology programs come on the dig and they had an incredible time), do it! It was worth every struggle for registration, every penny and every worry. One of the most important things I learned is there are opportunities for archaeology everywhere and there are other universities where students participate in multiple digs a year, multiple years in a row. I felt like a fool for thinking this was my one big change to participate in one. If you want to do archaeology, talk to your professors, do some digging and you can find opportunities. Once you participate on one excavation you learn about 20 others you want to do, and they can be done. I feel so silly for thinking this was a once in a lifetime experience when there is so much more opportunity out there. 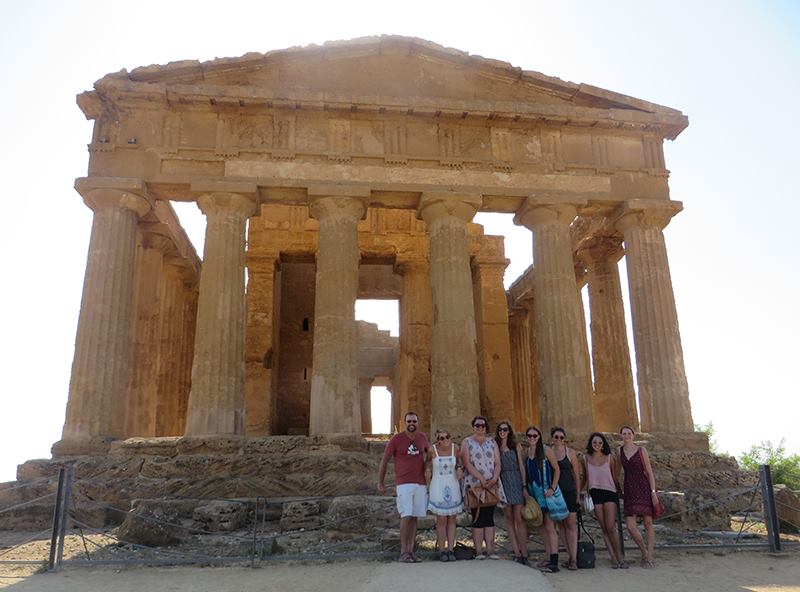 Scrubbing the Tanks (Home to the Columns) at the Museum 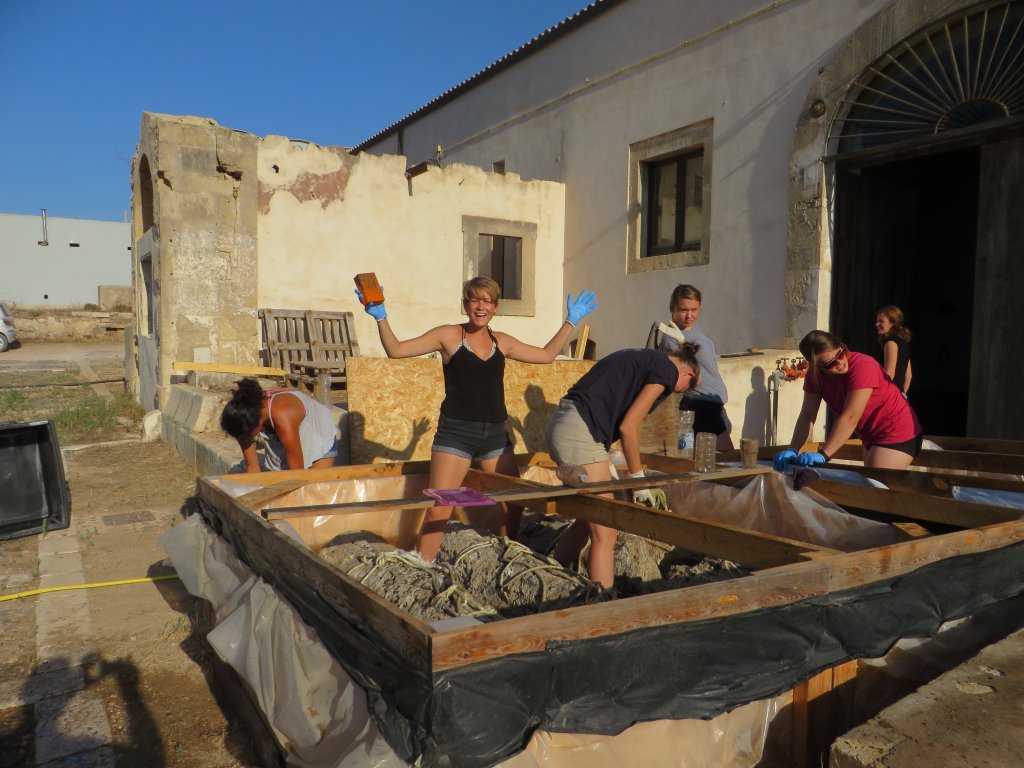