Italy 2 This page is part of the collection 'Archaeology at Carleton 2016'.

Etruscan tomb at Populonia - from the inside out

Trevor is working at the site of Caere, at modern Cerveteri, just north of Rome. The project investigates aspects of the settlement and has uncovered remains from the 8th century BC through to the Roman period.

Earlier this summer I had the privilege of going on an archaeological dig in Italy that was hosted by Queen's University in the city of Cerveteri. The purpose of this excavation was to examine the urban area of the Etruscan city of Caere. The city and the surrounding necropoli - which is what Cerveteri is most known for, dates back as early as the 8th and 9th centuries BC.

The site was already very interesting at first glance. The top most stratigraphic unit contained the remains of three basalt flagstones that would have formed part of a Roman street. But perhaps more interesting was the presence of two enormous cisterns in the middle of the trench. One of these cisterns had a series of terracotta pipes that ran Northward across the trench and into another structure that had a stone floor and traces of plaster along the edge where the pipe entered. The other end of this pipe terminated in a structure that housed other pipes going in different directions and was termed the "impluvium" for lack of other understanding. Ultimately it was the second cistern that would prove to be the most fascinating and amazed us with the many findings it offered up.

Another feature of this site was a very large and a very deep pit. Students working the area quickly started to call it the bottomless pit (there has been no bottom found as of yet), or at times the "Tomb of the Scorpion King". This theme would come to haunt us as the first place prize at our costume party was an inflatable toy of an Italian knock-off of Spiderman named "Scorpio".  Found adjacent to and surrounding this pit was a series rather large cylindrical smooth stones that as of yet have no defined purpose. Due to their phallic resemblance, they were dubbed the "sexy stones". It has been suggested that they may have been a form of boundary stone, but as I said we are not sure.  Still adjacent to this pit was another structure that contained the remains of a large dolium pot in one corner, and a sunken area in which there was a lot of ash found in another. One theory is that the sunken area might have been a kiln for firing pottery.

Apart from various walls of other structures that ran across the site that don't need to be explained in detail, this was what greeted us on the fourth day of excavation. Up to this point we had been simply removing the back-fill from the previous year hoping to expose the tarped over remains of what had thus far been excavated. Rolling back the tarps and brushing the loose dirt off of the remains was one of the most satisfying moments of my academic career. Partly because I was sick of back-fill and my heart broke a little bit every time we had to toss away a piece of pottery, but more because I began to feel like a proper archaeological student.

There are a couple of theories about what this urban area we are excavating could have been. Most of them hold that it is some form of public area, and the amount of water that was available is crucial to it. The theories range from the trench being a former industrial area, where water would be needed for the manufacturing of pottery as well as the smelting of bronze, to the very humorous Etruscan water park. Overall, this is a very interesting site and it kept amazing us as the weeks went by.

The site of Caere never ceased to amaze us. By the third week of excavations we had uncovered some truly remarkable things. More structures, more water(!) and some really cool finds.

Perhaps one of the most important bits (in my eyes anyway as I was working there) was the discovery of a large donut-shaped structure that we had to dismantle a part of the western trench wall to properly uncover. It became an object of great interest after a couple of other students began an excavation of a unit of fill alongside it. They were quick to find that the inner circle of the structure had clay plastered all along the side of the cut blocks that made up it's round wall. They stopped their digging upon hitting a large vein of clay in the floor of the hole they were excavating the loose dirt from. Following this we were quick to clearly define the circular shape of the structure and confirm that the clay was present all along it. Following this we broke down a part of the trench wall with pickaxe and shovel. What awaited us was a large gap in the middle of the donut (which should have been expected considering it was donut shaped I suppose...).  Below is a picture of the donut after we had collapsed the trench wall and had begun excavating the middle of it. 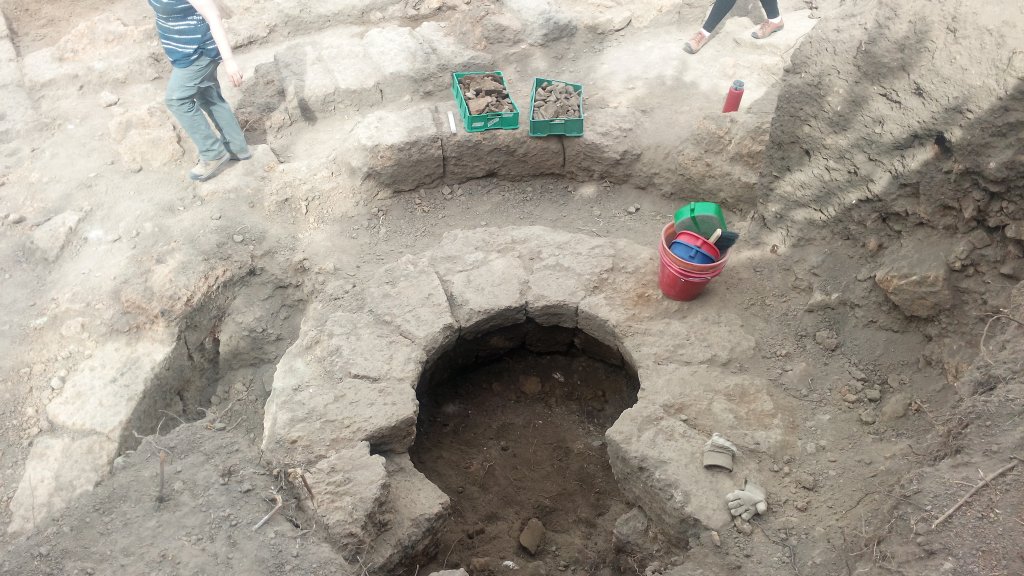 It would turn out to give us numerous finds that were worthy of our time and effort. First and foremost the structure of the donut is very interesting in itself. The middle fans out and widens the deeper one goes, and despite it being well past bedrock for this area it is completely made of cut stone blocks. The assumption is that the clay on the outside of it continues for the whole of the structure and was used to keep moisture out - leading to the theory that it could have been a granary. The donut also graced us with the presence of a piece of marble that had the beginnings of an inscription on it, as well as several pieces of bright purple stone, many bronze and iron nails, lots of pottery, and a piece of a bronze mirror. By the time we were done excavating the donut's middle, it was over 2 meters deep and 2 meters wide at the bottom.

Remember those two big cisterns we have? Well there were many interesting things that were found in the bigger of the two. For finds that we can pick up and show off, there were three almost fully intact Roman oil lamps with maker stamps on the bottom. These were found on the stairs leading down into the cistern. When I say almost fully intact, they were close to 85 or even 90 percent whole when they were found. This is not the only thing that the cistern had to impress us with. As one is looking into the cistern, on the far right end there is a channel in the ceiling that we assume was to allow rain water to pass into and fill the cistern. The fact that there was a connection between the two was determined through the most scientific means possible - knocking on the wall of the cistern and seeing if the person at the top of this channel (that had yet to be fully defined and cleaned) could hear the knocking. Very high tech stuff, but very interesting find. On the left end of the cistern was an even more impressive feature. This was a large tunnel that ran northward across the site. By this point we had found a hole next to the stone floored structure mentioned in my previous post and had begun excavating it. It would later turn out that this hole was a well that led directly into the tunnel, and it was perfectly possible for one to climb down this well and walk through the tunnel to the entrance of the cistern.

Have I mentioned that this site has a lot of water features? Just in front of and to the right of  (If one is facing North) the cistern with the tunnel we found another circular cut. As we started to dig down and the hole started to get deeper, we noticed there were handholds and foot holds cut into the side - this is very similar to the entrance of the other cistern that is present on the site. However we have yet to find the bottom of this structure that we assume is another well.

Caere is an amazing site I would definitely recommend it to anyone that is interested in going on an archaeological dig. Besides the super star of a site, the individuals that made up the excavation team and the professionals leading the field school were all wonderful people. Working with Dr. Fabio Colivicchi and Prof. Krysia Spirydowicz of Queens University, Dr. Michele Scalici of the University of Bologna, Dr. Domenico Sapone of the University of Bari, and last but by no means least Dr. Myles McMcallum of Saint Mary's University was an absolute delight. Not enough can be said about their willingness to answer any and all questions posed to them and their caring attitude towards all members of the team. There is not a day that goes by where I am not grateful for the chance I had to have been a part of this amazing excavation.

Below are two views of the site when facing towards the south of the Trench. 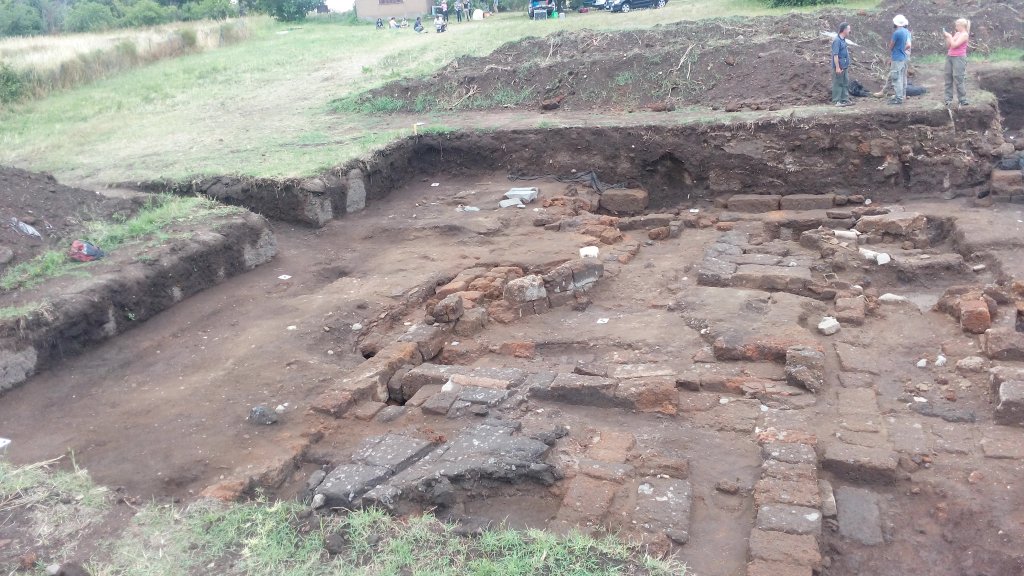 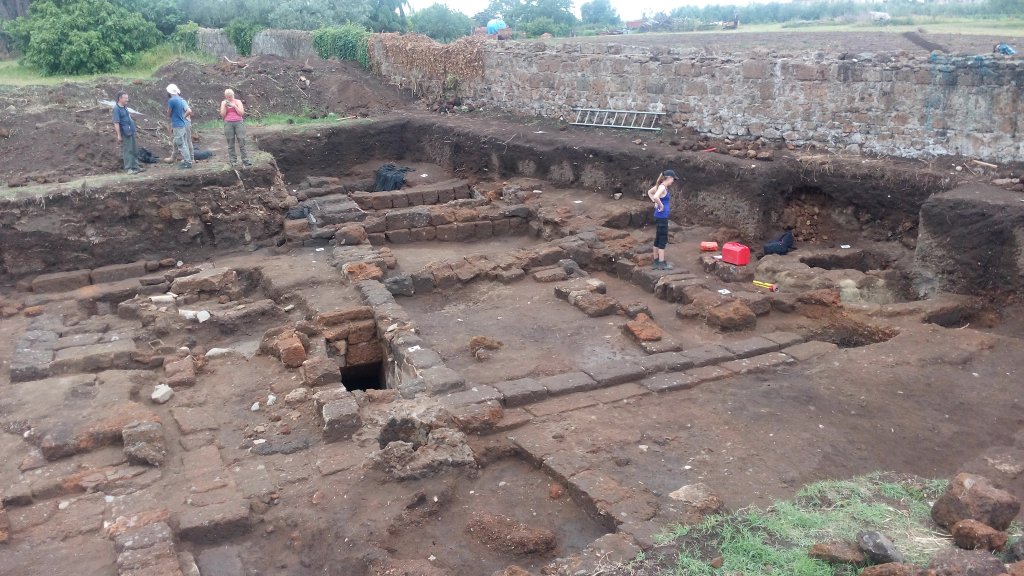