Wales This page is part of the collection 'Archaeology at Carleton 2016'. 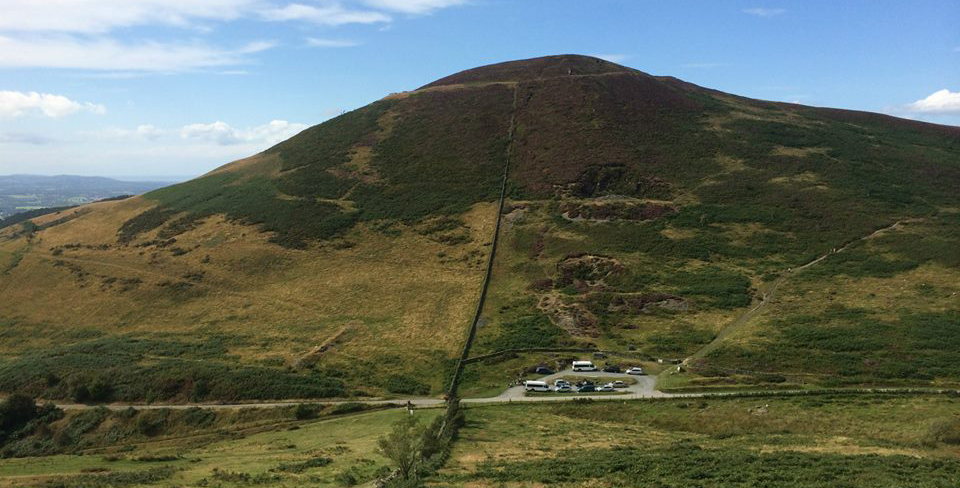 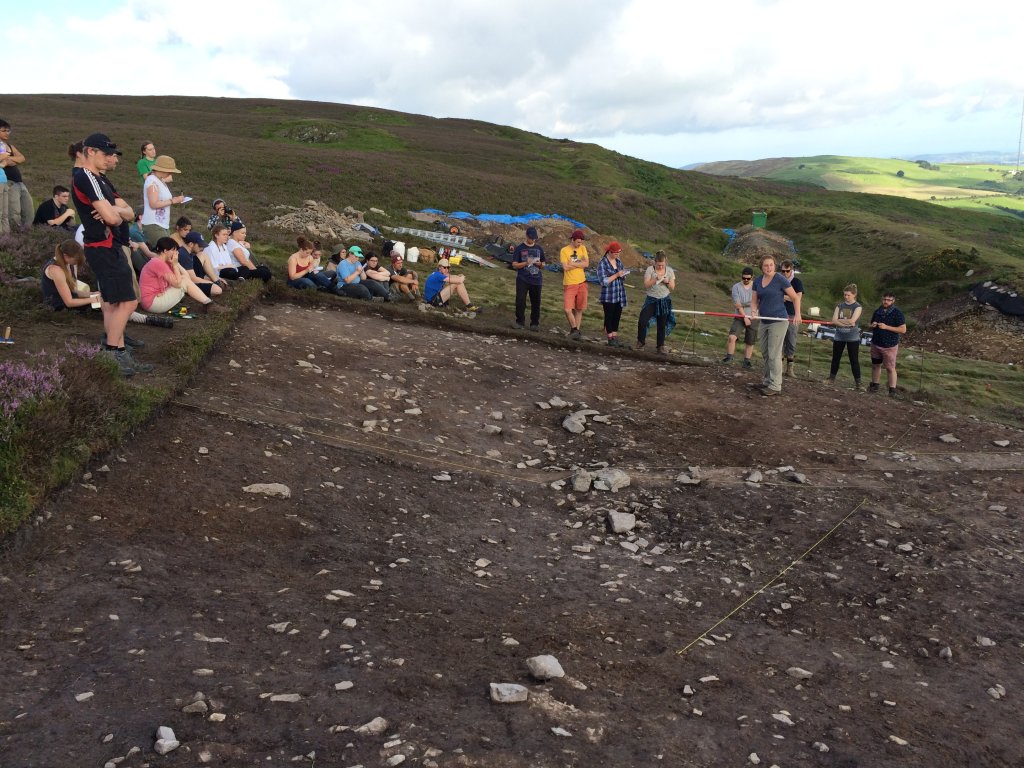 I have returned to Penycloddiau (a Welsh place name pronounces PEN-Y-CLOTH-EEAI meaning 'mountain with the earthworks'--very original) for the third time now. The northern most hill fort in Wales, one of the largest in the UK, and feasibly one of the oldest. There are two open area trenches gifted to us by CADW (welsh heritage). One is a huge trench place over the inner and outer ramparts and another on a nice looking levelled platform (a possible house). The hill fort is very high above sea level and is surrounded by other hill forts. Being in the middle of a hill range in the depths of rural Wales the view is amazing when we aren't in a cloud. The weather is always extreme, changeful and mostly unpleasant. I may make it seem like a strange and far from endearing place, but since 2014 this site has been my home away from home and I have come to love the people, the countryside and most importantly the archaeology of Wales.

The first year I was here as a student through the Institute for Field Research (IFR). The second year I was a second tier supervisor who was quickly tasked with the responsibilities of a professional. This year I have returned with the same amazing team in charge of very big trench with a vital bit of archaeology; a roundhouse. As Penycloddiau is run by the University of Liverpool under the tutelage of Dr. Rachel Pope and Richard Mason it is the first field school all Archaeology, Classics or Egyptology students have to attend before digging further afield with the University. The result is about 40 students are in attendance. About half of these very green archaeologist are left to me to be fully trained when they leave in a few weeks. This is mostly because the roundhouse platform is flat and insitu Late Bronze Age/Early Iron Age rampart stones aren't about to collapse onto the newest additions to the archaeological profession.

Being a 'profession' or fully fledged supervisor changes the I work and as a result the way I experience my time here in the UK. I remember when I was a student I was bombarded with new information and skills that I never had before and as such I frequently felt as though I was being swept along for the ride only understanding bits and bobs as the days went by. Now, three seasons later after time at different sites and doing more upland archaeology I've been given students, deadlines and have to carry the torch for an entire trench. The goals for the season are immense as the rampart's ditch appears to be 3 meters in depth and can't keep being opened up for labour and safety reasons. The inner rampart has to be left till next year due to safety issues for those digging the ditch. The outer rampart has to be figured out (because it hasn't made sense since the area was open 4 years ago). The rampart scoop (where material in addition to that which is taken from the ditch was used to make the ramparts) is to be finished. The house is supposed to be finished. To say my colleagues and I were stressed from the initial meeting to discuss goals was an understatement.

I luckily had worked on the house for half the season in 2015 and knew I'd be inheriting it fully in 2016. So, much of what I'd done the year prior I'd tried to remember. When we de-turfed the area I'd was able to identify all the contexts in plan and was able to proceed with work quickly. Since at PEN we excavate 'in-plan' in an open area, there are no small sections/slots to test relationships. Each deposit is removed stratigraphically and baulks are left in for recording at the end of season. We do overlays when each context is removed so that sequences of deposition and formation are well recorded and can be fully understood. We had two large dark bands around the the end of the house platform, each ending where possible entrances were located.

A lack of postholes and stone structure has led to the directors and myself to conclude that these bands were possible degraded turf/organic material used to create the roundhouse walls. We've now also excavated an occupational deposit that seemed to have been on top of the house's floor (possibly a laid floor/beaten floor, or just another occupational deposit that accumulated over time). What the deposit yielded was our first bit of material culture ever found in the 5 years Penycloddiau has been under excavation. A small piece of crude ceramic was found along our band of stones that maybe have been used as a foundation for the turd walls. For the students it was an exciting moment, but since most of them were into classics or egyptian archaeology it seemed strange that most of the supervisors shared little tears of excitement. As hill forts are poorly understood and are a substantial characteristic of the Iron Age in Britain (and especially North Wales and Southern England), finding a rare piece of material culture will be able to contribute to our understanding of hill fort use in the region. As it is still early in the season, we'll have to wait and see what else the site has to tell us.

Until next time (when I'm probably more stressed and even more tired),

The weeks that have followed at Penycloddiau have been intense. At the University of the Liverpool Field School we get two groups of students. One group of about 20 for half the season and then another 20 (group two) for the second half of the season. It creates for a very stressful time, as we have to train a new group of novice students while being the peak of the exaction period. As I mentioned last time, being on the roundhouse means I get most of the students and have most of the training to teach. The students get lectures on stratigraphic excavation in open areas, they even get to do a mock excavation on a trifle--a British pudding/dessert. They get a tour of the site but then they are put to work. Meaning the first year students' first deposit removal will be of a 3000 year old upland hill fort roundhouse floor. A beaten/laid floor to boot.

The removal of the floor proved to be more difficult than expected and for upland archaeology on a Late Bronze Age/Early Iron Age hill fort that's saying something. The floor initially upon exposure was a medium tan brown with degrading stone as an inclusion within the deposit. After a day be it rain or shine the deposit went a dark purple grey. Whether it was a result of the mineral content reacting or the weather the process is still poorly understood. However, it meant that we had to recognize this change. When we started to excavate it we had to identify without much confidence if the the floor was still the floor. It meant for many debates.

With that in mind, a good joke in the field here sums up the situation I endured: What do you call a group of archaeologist?... An argument.

Anyways, trowelling the floor off wasn't fast enough, it muddled our ability to distinguish if we'd removed it all. The result was that 12 students had to learn--quickly--how to safely use a mattock and then crack on. The environmental samples further complicated the floor removal. The location of the excavation is in a remote area in North Wales which means that sieving and taking samples down from site is a problem. As the directors don’t want samples from the roundhouse to be sieved for fear of losing material, many more samples are taken back to camp where everything is processed for the labs. As of this year too, we have started taking the heavy fractions from the floatations which has created more work for a small team back at camp. The reason for keeping the heavy fractions is because we only reached occupational deposits this year. Before deposits were post abandonment and collapse events and were thought by the directors to likely yield very little information. We also have started sampling 100 % of the deposits, and the floor proved itself to be the most substantial deposit from the area. The result? Over 400L of one deposit to be floated. It seems over the top, however the heavy fractions yielded an abundance of ceramic remnants that would have either been intentionally put into the floor material, or accumulated throughout occupation. Another thing that made excavation difficult but will hopefully proved more information about occupation and roundhouse uses was that the platform was divided into 10 sections sort of like a bunt cake. two section at the relative centre of the house and multiple sections extending from the centre two outwards. This was so every sample was labelled as coming from a certain area on the platform (sample areas lettered from A to J). The purpose for this was because one of the site directors, Dr. Rachel Pope, is interested in distinguishing activities that might have been occurred within the house platform; storage of grains in one area, processing in another, sleeping in another. The hope, by putting these sections in place, is to pick up on any concentrations of seed, charred material, ceramic etc. can be discovered so that maybe activities can be understood. This seemed to be a very intelligent choice since in the UK this method is seldom practiced. But I imagine it should be used more regularly because, as my fellow supervisors and I said, so much more information can be gathered if were to know where within about 1m environmental evidence were found. So it should be interesting to see if the method is helpful in answering Dr. Pope’s questions!

The next few days will be hectic as we do our master plans and get all the records and photography up to date before we close down. Now that the floor is up, there is only the levelling material and a possible midden-like deposit near the rear of the platform that is likely contemporary to the occupation or floor deposits. These unfortunately have to be left until next year where we will do a section through the levelling material, and the last bits of the house will be removed. As for the rest of the site, the ditch was completed (the major goal of the season). Now for next year it is deconstructing the insitu rampart and investigating an earlier palisade that was discovered on the last few days of excavation. After recording is done, we backfill and head home for another year. The final results of the season, and our understanding of the floor and the other areas of the site will depend on the environmental an post-ex process.

What I can say is that I can’t wait for next year, the final year at the site! Then it’ll be onto the next place!