Spain This page is part of the collection 'Archaeology at Carleton - 2017'. 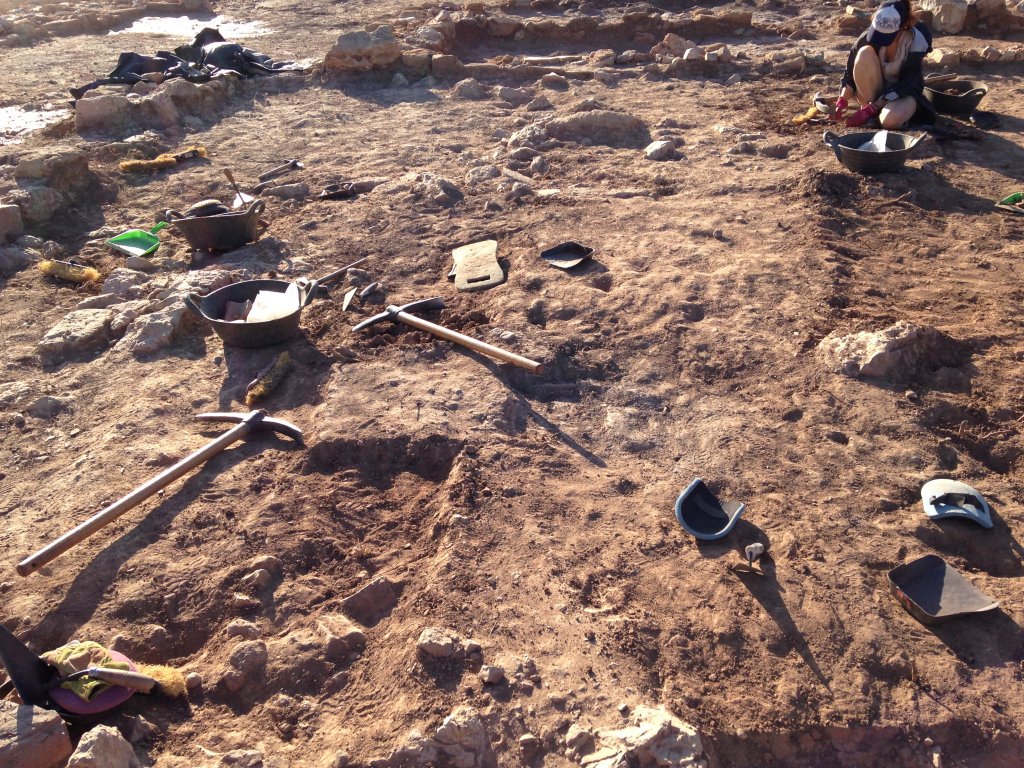 Nicholas is excavating a Roman city on the island of Menorca with the Sanisera Archaeology Institute.

In the beginning, most of us students had no idea what we were doing on our first ever dig here at the ancient roman port town of Sanisera.  With delays preventing a coherent start everything was up in the air and we were unsure how things would progress as our shuttle of 6 arrived 2 hours later than everyone else's.  However, with straightforward instructions by our supervisor Ismael as well as friendly students whom had done field work before, learning the work flow on a site was simple.  Taking the five-minute trek up to the site from the road we arrive at the last remaining ancient port on the island of Menorca with the other two being continually rebuilt over the years to form their current modern cities. Gathering supplies from the storage area we would take the appropriate tools to our assigned area and commence the excavation.   The main tool used throughout our excavation was the large pickaxe.  It was used to clear layers of the tightly compacted dirt in one swing to the required layer depth of roughly 4cm.  Continuously chiseling away the layer to flatten and lower the excavation level, a large amount of dirt would accumulate.  This dirt would be then collected using a trowel with its scraping motion along the ground and a scoop to transfer the dirt into a rubber bucket while kneeling down on knee pads such that we don't damage our knees on the dry rugged terrain.  During the transfer I would scan through the dirt for any artifact such as pottery, bone, shell, glass or metal and place all but the metals into their sorted bags.  (the metals would be placed into special bags held by the supervisor).  Through this process the game of figuring out rock from pottery became a joke between members as whenever the question was asked to our supervisor four out of five times the answer would be rock.  After sorting through the dirt, the bucket would then be transferred to a staging area outside of the excavation area where it would be scanned with a metal detector for missed metal fragments. Then once cleared it would be dumped into a wheelbarrow and hauled up the dirt hill and be dumped into the large ever-growing mount on the corner of the site.  As beginners, mistakes have been made where someone would forget to scan their bucket and subsequently try to scan the metal wheelbarrow with the metal detector but quickly we got better as a group learning to work on our work flow to efficiently clear large flat areas.

For the first couple days of the dig I we set to work in the middle of the building that we were excavating, removing the collapse and working my way towards the walls of the structure.  When I reached the southwestern wall of the building I transferred over to a new set of tools in order to better define the walls within the structure as well as preserve the larger concentration of artifacts that are more common around walls.  Replacing the large pickaxe, a hand pickaxe is used instead to slowly pick away at the dirt where the wall is believed to be located. The hand pickaxe would also be used alongside brushes when larger intact pieces of pottery, walls or other delicate artifacts are found.  During the early days there weren't many instances of larger artifacts that required brushes however one of my fellow students uncovered an entire base of an amphora in great condition.  Finding it, led to her to spend the next several days working nonstop in this small area using only a brush and small pickaxe removing very little dirt as she carefully unearthed the base.

Working at a near mechanical level we worked under direction from our supervisor continually asking questions that would help guide our path as we slowly dug up the collapse within this ancient building at the site of Sanisera.  Over time we will become more independent and more knowledgeable and thus improve our ability to both appreciate, understand and work on this beautiful site here on the Balearic island of Menorca, Spain.

As the midday sun grows hotter at the roman site of Sanisera we retire to the labs from 10:30 onwards to avoid the dreaded heat of the mid-day Mediterranean sun.  There, we clean and categorize our daily finds as well as study what our finds mean for the context of the site.

At first, for us the lab was a place of relaxation where we'd mindlessly work to clean pieces of pottery or bone.  Finding thousands of artifacts on site each artifact (apart from the rare metal or unique artifacts) held very little value to the us due to our lack of knowledge and their overabundance. Over time this changed as our appreciation for the site grew through attending lectures on the significance of the smallest pottery fragments and shell.  Given more meaningful tasks such as labeling the pottery with a fancy fountain pen and organizing them, a chronology of the site was laid out in a way that felt far more real than what we had been doing before.  Through lectures and constant exposure to the differing types of pottery we learned the main types of amphora and fine ware common for the site.  Mainly composed of the African amphora (3rd century AD to the 6th century AD), African cookware (3rd century AD to the 5th century AD) and T.S Clara fine ware (2nd century AD to the 7th century AD) we became adept at recognizing pottery types and becoming free from the dreaded guessing game of pottery or rock.  Although with finds being mainly one of these distinctive types, we still had some difficulties when it came to the rarer pottery shards such as Terraconese Amphora, Betic amphora, the occasional roof tile and many others.  As these fragments came to life, we no longer thought of them as simple fired clay shards but rather pieces of their original containers, carrying anything from oils to grains or being used as plates for eating. Having this in our minds as we dug brought impact to everything we did.  With a friend on site finding an intact African amphora base meters away from me, or finding a burned rim of African cookware myself surrounded by charcoal and ash, the site came alive as a real building from thousands of years ago where people lived their lives in peace like we do today.

However, it wasn’t just pottery alone that gave the site meaning, even the small things like the shells and bones that helped understand their diets and trade routes created a sense of familiarity as the image of people gathered around a table eating their shellfish and other meats lingered in our minds.  Lastly the grand feeling that reminds me this was real was my astounding luck in finding 5 roman coins varying from the early empire, to the late empire and even the vandal era.  From this concrete evidence of the roman population, as well as the sophistication of their society rivalling our own in terms of cultural practices remind us of its grandeur.  With marking on the tails end of the coin and even an eroded portrait of an emperor on its back, dating back over a thousand years, you are able to feel the true weight of the sites age and importance to modern society.

Found here within the collapse between these walls that we have been excavation here at South eastern Sanisera sector 5 building 13 context 1346 we have found more than just artifacts and buried walls.  Rather we have found a small piece of time locked away and preserved showing that these people were here living lives just as we are now.